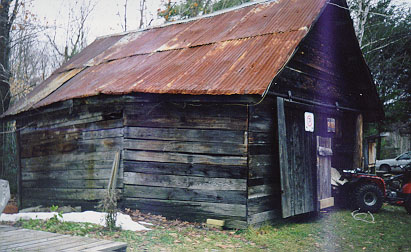 In response to a few queries about what I used to do before I went back to University (well, alright, it was actually only a Polytechnic at the time) I've written down a few of my memories, covering the years 1984 to 1987.

I left Malbank school in June, 1984 with naught but an A Level in General Studies and a few big dreams in my head. Having not planned to go to university at that time, I didn't have to worry about re-sitting my exams and was free to discover my own path. I decided to take full advantage of the Enterprise Allowance scheme and set myself up as a comedy writer.

Now, I don't know about you, but whether I'm seeking comedic inspiration, chilling out to the far-out sounds of Ya Ho Wha or simply pulling the head off a duck, I like to do it in a nice shed. And I've known a few nice sheds in my time, I can tell you. However, the greatest of all sheds is the one pictured above, which was situated on a small farm just a few miles outside of Nantwich. Using my Enterprise Allowance, I rented this shed out for the grand sum of £5 per week and it was here that my career as a comedy scriptwriter began.

One of the first jobs that I got was to provide the episode outlines for The Goodies 10th Series. I came up with the following ideas:

- In a gentle sideswipe at the government, Tim finds himself persecuted by the Prime Minister for his all-round niceness and runs off to Scotland, where gets a job as Second Broom for the Seven Dwarves Curling team (all played by Bill). The Prime Minister finds out where Tim has gone and follows, determining to rid the country of goodness, niceness and shiny shoes for once and for all. On the eve of the All-Scotland Curling Championship she manages to give Tim a specially-poisoned broom, which causes him to fall asleep for a hundred hours. Bill summons Graeme to come up with an antidote to the poison so that they can win the Curling championship and bring niceness and goodness back to the country. Unfortunately Graeme's antidote has an unexpected side efect...

These outlines were accepted, with a few minor changes and I was asked to work them up into scripts. Sadly, the final scripts were never filmed because Bill Oddie had by this time become addicted to bird-watching and was living in a hide at the Sandy Nature Reserve in Bedfordshire. Whilst waiting for Bill to recover, Graeme became the first privately-run health practitioner and set up a lucrative practice in Shepherds Bush, where he still treats BBC staff and audience members between recordings for Just a Minute and I'm Sorry I Haven't A Clue. Tim retired to the picturesque village of Leaking Buttress, where he spends all day polishing his shiny, shiny shoes. He used to shop in the village but became so fed up at being mistaken for Ian Lavender that he now does all his shopping online.

Anyway, despite the failure of the Goodies project to get off the ground, I managed to keep my head above water and scored a lot of litle commissions, working on extra (uncredited) lines for sitcoms such as Me and My Girl, 'Allo 'Allo, and Fresh Fields, and contributing material to such greats as Cannon & Ball, Little & Large, Des O' Connor and Jimmy Tarbuck. And, of course there was the occasional break-through catchphrase that would get me more work - for example, I came up with both "There's More" for Jimmy Cricket and "Ooh, bit of politics, bit of politics there" for Ben Elton during the same weekend.

Then, in the winter of 1985, I got what I thought was my big break. I got a call from Hollywood producer Johnny Stromboli, who'd seen the stuff I'd done for Fresh Fields and wanted to commission a film based on it. They told me they'd already got Bette Midler and Richard Mulligan (of Soap fame) as the leads. Hooray for Hollywood! I made a couple of calls to check out that things were legit and then packed up my trusty typewriter, and headed out to good old LA. I have to say though, that even though I'd dealt with all manner of sharks and sharp operators in the England I was not even remotely prepared for the American way of things. Everything went pear-shaped from Day One - the leads actors pulled out, then they were back, then they were out again, the storyline changed just about every other day, involving numerous re-writes, and they ended up bringing in another writer to "US-ify" my script. By the time we got to film it, it was a sprawling mess and even the best efforts of Tyne Daly and Paul Michael Glaser couldn't turn it into a success. It was totally panned at preview screenings and quietly dropped from the schedules. Hopefully, it'll never see the light of day.

When I got back to the UK in late 1986, I found that not only had the Americans been loudly trashing me to everyone else in the business, but the government had stopped my Enterprise Allowance because I hadn't signed on for more than twelve months. I tried to drum up work, but by now no one would touch me - they wouldn't even look at the free stuff I sent them. After six months of trying I finally gave up, took a job working in a comic shop. Three months of this were enough to convince that I couldn't spend the rest of my life down amongst the dead men, so in September 1987 I went back to college, got a couple of 'A' Levels and the rest you know.

Recently, following my redundancy from Convergys, I got in touch with one or two of my old contacts in the comedy business and am now looking to make a comeback. I've pitched a couple of ideas to Radio 4 and am also working on a new series for Ant & Dec. Here are just a few ideas that I've come up with:

As I said these are just a few of the ideas that I've had, and I think I'll probably resurrect some of those ones for The Goodies, but obviously with a post-ironic spin on them. Ah, it's good to be back.

Until next time, be good to yourself or else..... 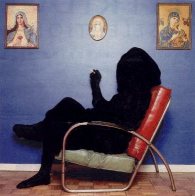 Yeah, sorry about the picture - I think there was a problem with the the lighting or something. These digital cameras can be a bit tricky. I'll try to get another one done soon. Copyright: Jim Lawrence, 2003 - Absolutely no ripping me off or else I'll send the boys round. Right?